Thank you for visiting my website. As a former Prince George City Councillor and Director of the Regional District, as well as member of the Omineca Action Committee, I am currently back into consulting and teaching. At the City of Prince George I also served on the Internal Governance Committee, the Core review committee, as well as the chair of the Standing Committee of Education.

Please read the “news” section of this website to find more current stories. You can read below for more of my bio.

I was born in Bremen, Germany and grew up on a farm on the outskirts of the city.  After graduating from high school I learned the trade of “Mechanic for Agricultural and Forestry Equipment” and worked for a time as a licensed mechanic.  Later I studied Mechanical Engineering, first in Cologne and then at the Technical University of Aachen.  After graduation with a Masters Degree I accepted a 6-year employment contract as Assistant Professor with a Research Institute at the Technical University of Aachen and received my PhD in 1981.  Thereafter I was manager of “Reliability and Applications” with a large corpoartion in Duesseldorf.

In March 1985 I fulfilled my dream and immigrated with my wife and our two children to Canada.

During an earlier visit we had decided that Canada would offer us and especially our children the future we envisioned.  After a year of employment with a company in Vancouver I started my own Consulting Engineering Company, Tribotec International Ltd.  While this company grew rapidly I founded two other corporations, “A & A Tools Inc”. and “The Maintenance Technology & Training Institute of Canada Inc”.  We sold the latter two companies after sufficient market penetration. 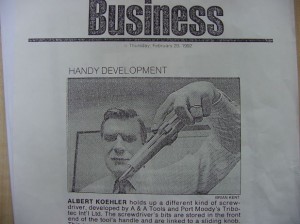 During our time in Vancouver I registered several patents, including a Multiple Bit Screw Driver and a Saw Guide patent for sawmills.  I volunteered as board member of large organizations and taught Reliability Engineering Management as Adjunct Professor at UBC.

The expansion of the Consulting Engineering Company required the establishment of a branch office in Prince George.  To start up this office I moved in 1996 with my family to Prince George, but travelled weekly to Vancouver to fulfill my teaching contract with UBC and to maintain contact with my head office and our customers.
Later I assisted with the establishment of the Environmental Engineering Program at UNBC, the university in Prince George, and also taught as Adjunct Professor when the program was in operation.

Beginning of 2004, I sold part of our Consulting Engineering business and invested in real estate in Prince George.  At that time I was elected as a board member to various organizations in the Prince George community, including the Chamber of Commerce and became the president of the Chamber in 2008.

In 2010, I founded the “Northern Technology & Engineering Society of BC” and subsequently became its President (www.ntes.ca).  Thanks to the society’s lobbying activities the Prince George Postsecondary institutions are starting up with new technology and engineering programs with a student intake scheduled for September 2019.

My journey from the small village in Northern Europe to Prince George in Central BC has been most interesting, challenging, enriching and also very rewarding.

Over the years I have served on the following boards since immigrating to Canada in 1985:

During this time and earlier I have received the following honors and awards: