Undergraduate programs are next step: engineers 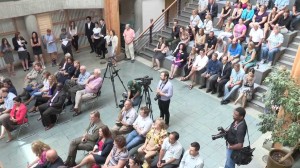 UNBC still has more engineering work to do.

Those in the engineering field were not talking about new structures, they were referring to education programs that still should be added.

When university, government and private sector officials met at UNBC on Friday to announce two new wood-focused masters programs at the school, the name spoken most often as an advocate for the engineering expansion was Albert Koehler. An engineer and industrial product inventor himself, he has been lobbying for years, according to Prince George MLA Shirley Bond, the minister responsible for jobs and skills training.

“It’s the first time in Canada that a degree has this specialty,” said Bond. “It is essential, as we continue to use our revitalized wood sector, that we look at innovation and think differently about wood’s uses. I’m thankful I can look Albert in the eye, now, after seven or eight years [of his lobbying] and say yes, engineering is now underway at UNBC.”

Koehler said he “was not unsatisfied” but considered the two masters programs “an important step forward with a long ways to go, still,” for engineering at UNBC.

“It definitely brings the diversity and innovation agenda forward,” he said. “It adds imagination to our 2×4 and 4×8 and plywood thinking. But we need full civil and mechanical engineering programs at UNBC. The Canfors of the world are looking for those people and having trouble.”

“The bottom line is, you can’t develop your resources without engineering,” Starck said. “We used to be able to call up Allnorth or one of the other regional companies, but there is so much demand on those companies that we have to go farther and farther away to find the expertise and then you run into people who don’t understand your region, the details of your local situation, or aren’t as responsive because their head office is far away.”

He agreed that undergraduate programs were the next step UNBC needed to really create a northern engineering culture and “underpin this important masters stream” announced Friday.

Shiloh Carlson also makes a case for a full engineering program at UNBC. Although her parents wanted her to attend UNBC and chose a different profession; she insisted on leaving Prince George because her mind was set on engineeringn. She was trained elsewhere and chose to return to her Prince George hometown, where she is now a geotechnical engineer with McElhanney see this here.

“I’m one of those who would have loved a local program. I didn’t want to leave but I had no choice,” she said. “I’m excited to see the wood innovation masters degrees, it’s a great step forward for UNBC, but I would hope to see an undergraduate program soon, as well.”

What’s missing, she said, is the commitment of the provincial government to invest in such programs in the north. She urged officials with the Ministry of Advanced Education to consider the alternative costs of having to import engineering expertise instead of honing area residents, and the cost of industrial slowdowns because the engineering talent wasn’t there when companies and levels of government needed them most.